– Spices – The Trick Behind Our Magical Desi Foods 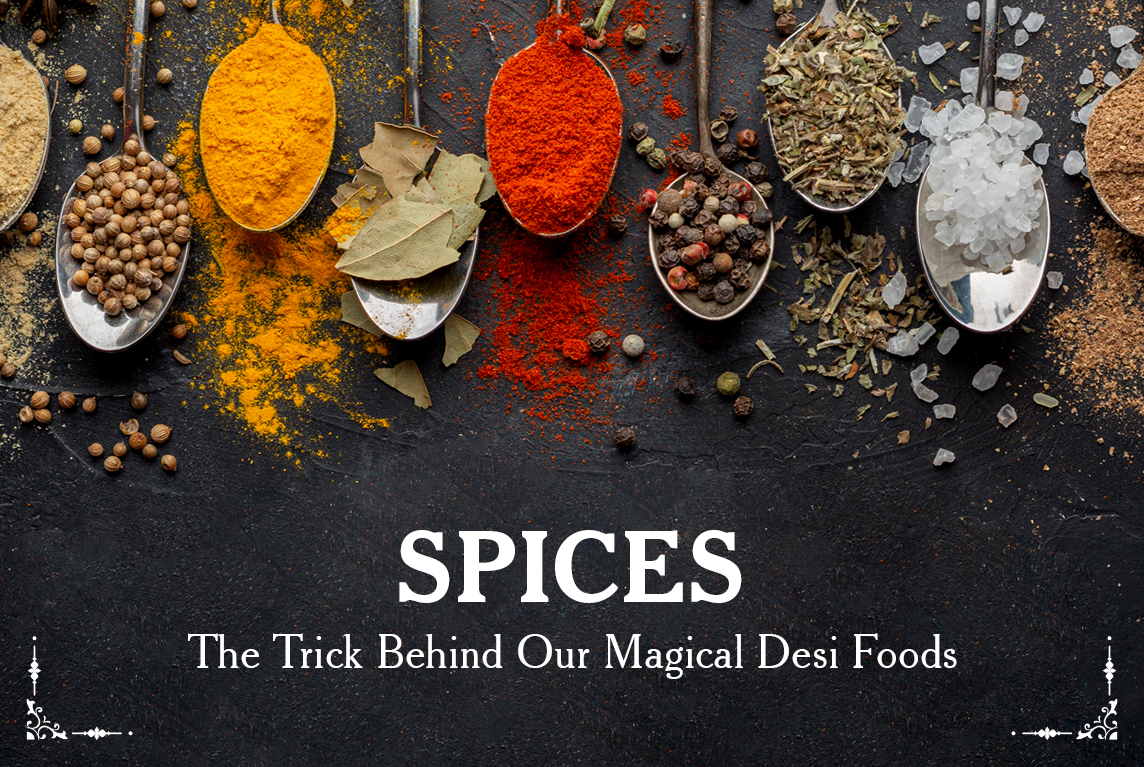 History shows that spices have been adding their magic to the taste of our foods for the last 7000 years, and these essential spices still stand strong behind the taste, range of flavors, and consequent deliciousness in our desi foods.

The ancient civilizations of the Greeks and Romans are one of the oldest parts of history. But do you know what is even richer and more ancient than that? It’s the history of our visually appealing, aromatic, and magical spices that reflect the evolution of desi flavors in different regions and countries.

Before the Greeks and Romans, Indian spices were traded to Egypt, Arabia, Sumeria, and several other regions. Then came the great explorer from Portugal, ‘Vascodigama’ who left his home in search of something worthy, unique, and notable; later he found something of great value, especially for desi food lovers – The Indian spices and desi masala. He thought of trading those valuable spices to Europe, and instead of using the Silk route, which was usually used to trade spices and goods, he discovered his path by establishing a direct sea route from Europe to India. And since that day, Vascodegama is known for introducing Indian spices to the Nation of Europe.

India’s geographical superiority and ample fertile lands are a blessing for all of us, since these spices grew in the Indian lands, they have been globally known for these exceptionally aromatic and tasteful spices. At the time when independence was finally in effect in the subcontinent – India and Pakistan, during the land distribution, got shares of these fertile lands; making Pakistan the second largest of all the countries involved in the spice trade.

Our desi masalas aka spices are the absolute favorites across the globe, because of their unparalleled texture, aroma, and a wide range of flavors that make our food immensely more pleasurable and appetizing. Desi spices have that salivating magic that brings shine and colors to the food with a flavorful aroma and leaves a magical sensation of seasonings, that can be experienced in every single bite.

Our spices not only give our desi foods a punch of flavors but also provide health benefits and work as a source of antioxidants as home remedies as well.

Some of the basic spices that add richness of the flavors in our desi foods are:

Turmeric is one of the essential food spices since desi food will always be incomplete without turmeric. Its bright yellow color adds an earthy flavor to the food and leaves a radiant texture in our food, making it more delicious. Turmeric is one of the most popular desi masalas, which is known for its anti-inflammatory properties. Our grandmothers loved turmeric because it has been a remedy for weak bones and also carries elements to add glow to your skin.

Very few subcontinental dishes are made without coriander powder. It is one of the most extensively used spices that is used in every food. It adds the amazing savory and tart flavor, that we barely ever skip coriander powder in our foods. As far as its health benefits are concerned, consuming coriander water can help with gastric issues and cure digestive problems.

Desi food without Laal Mirch powder is just like a fish without water. It will never make sense for a desi chef to cook food without Laal Mirch because desi food is known for its spicy flavors and shining rich red color, which all comes from our favorite desi masala which is Laal Mirch powder. The red chilies are dried and powdered as the taste varies on your choice of how much hot and spicy food you love. Laree Adda always keeps the choice of their customer on priority and adds chillis according to their taste.

Garam Masala is a fusion of different ground spices like cardamom, nutmeg, cloves, star anise, peppercorns, and many other spices. It is a wholesome desi masala powder that gives our desi curries a dark brown color with an intense succulent taste of all spices in just one dish. Laree Adda is very choosy when it comes to Garam masala powder because this versatile desi masala can make the food immensely tasty, and this is all Laree Adda wants.

Cumin, when roasted and powdered, gives a lovely aroma to every desi dish as it feels like cumin is specially made for desi foods. But cumin powder is not only used in Indian and Pakistani dishes, but it also adds the magic of its flavor to many other continental dishes. Be it a Tarka in Laree Adda’s ‘Daal Tarka’ or the Zeera Pani served by them, zeera powder is an essential masala in Laree Adda because they understand its health benefits.

Our spices and desi masala have taken the responsibility to make our food tasty and unbelievably delicious but now it is on us how to use these aromatic spices in our desi food. And if you want to taste the flavor of each spice then Laree Adda is at your service, providing the best quality of food with organic and flavourful spices.