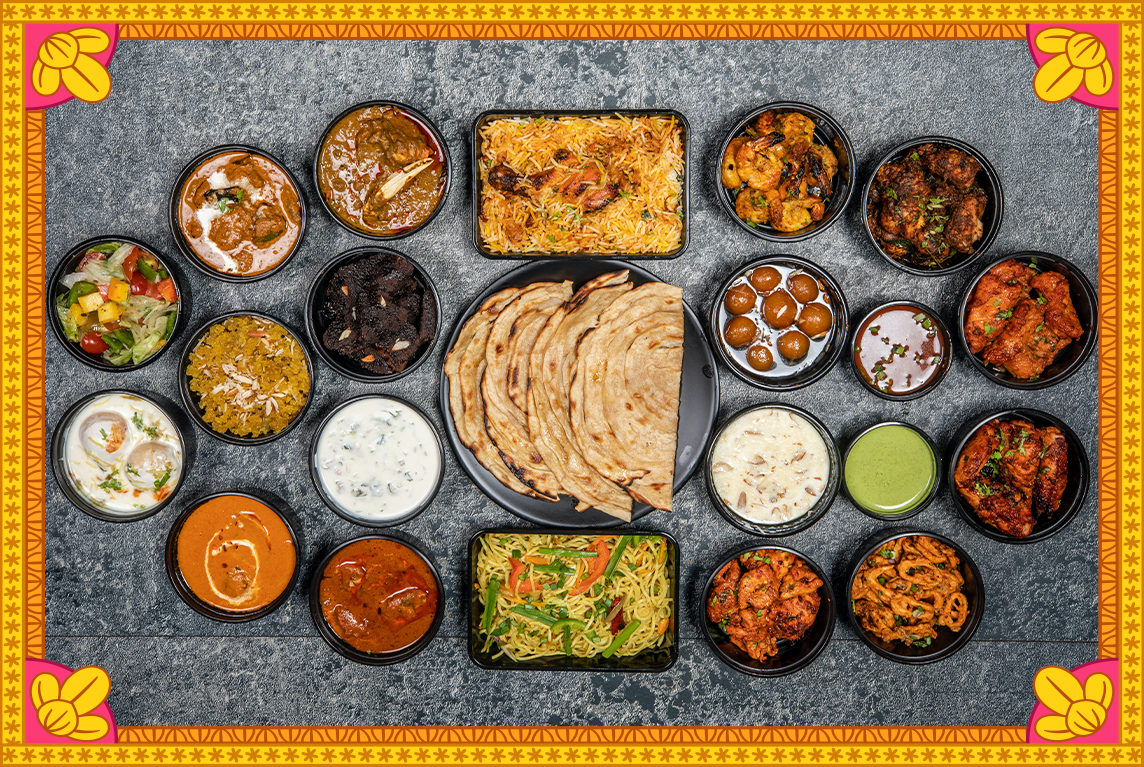 The Mughal Empire has guarded their culinary secrets more viciously than their wealth – And rightly so. The emperors were connoisseurs of complex recipes with the royal kitchens chopping, brewing, and whisking various dishes to satisfy the lavish taste buds of the nobilities.

If you were to take a glimpse into the past, you might see a flurry of activities in the royal kitchens, with curries and multiple gravies being garnished with edible arrangements and herbs. The royal cooks frantically gave instructions to subsidiaries, ensuring that the menu is stretched to its ultimate perfection; in terms of taste, style, and the use of ingredients that were considered medicinally beneficial. A few whiffs of the air would have been enough to send an empty stomach growling.

The prepared food was painstakingly detailed, as it played a significant traditional role in delivering messages of prosperity, status, and power to the world. This helped shape the entire legacy of the Mughal Empire and the lengths that the royal kitchens would go, to amaze and serve their emperors.

Where Did The Cuisine Originate From?

The famous ‘Mughlai Cuisine’ evolved in Medieval India with its known signature spiciness, rich taste, and a blend of its unique aromas. The Mughlai style of cooking was speculated to be quite a time consuming, to ensure only the best and most flavourful of dishes. Being heavily influenced by the Persian, Afghan, Kashmiri, and Deccan regions – It truly is a cuisine fit for kings.

This legacy stands on a foundation laid by Babur who is responsible for bringing Uzbekistani cuisine to India — preferring his own native food over Indian food at the time. Historians also say that Babur’s cooks were used to the idea of war and prepared a specific diet for the soldiers accordingly. They would use earth ovens and fill up pots with a variety of ingredients like meats, rice, and spices (Of-course!!); and then bury them in hot underground pits before they are dug out and served all around.

Most emperors from the Mughal Empire brought their own unique taste with them, like Humayun who brought a Persian influence to the table, and Akbar who employed cooks from all the corners of India. This resulted in a combination of the most complex and appetizing dishes. Spices like Haldi (turmeric) and dhania (coriander) became common in royal recipes for their medicinal properties.

Other Mughal emperors incorporated fruits into their diets, such as mangoes — which still remain a national fruit in both India and Pakistan.
Fruits like melon and others were included in drinks like sherbet and were considered a favorite among the nobility. If you want to treat yourself like royalty for a quick minute, Laree Adaa’s sherbets and Lassi’s will be sure to give you a better understanding of why the Mughals craved them so!

Even their breakfasts consisted of meals that would tempt the most immovable of us – One of which is Nihari, which originated from the Arabic word of ‘Nahar’ translating to ‘Morning’. It was a breakfast staple of the Nawabs in the Mughal Empire who would consume the stew-based dish for its energy-boosting properties. Meticulous preparation of meat along with the bone marrow, through slow cooking at a low flame for hours, ensures a heavier and meaty flavor; but this stew also keeps various illnesses at bay while helping to keep warm in the winter months.

The best way to devour this hot stew is by dipping a slice of freshly baked roti or by wrapping the meat or bone marrow in it – And your tastebuds will be forever thankful, once you try Laree Adaa’s Nihari!

Even the most famous & mouth-watering dish from the Subcontinent, our beloved Biryani, owes its existence to the Mughals. Many speculate that the origin of the biryani came from Shah Jahan’s beautiful wife Mumtaz Mahal, in the early 17th century — who also inspired the Taj Mahal — and it was her idea to feed the Mughal warriors a combination of meat and rice to provide a balanced nutritional diet. She’d noticed that most of them seemed to be malnourished; this keen observation led to the birth of our very beloved, Biryani.

What Constitutes the Mughlai Cuisine?

The royal kitchens dabbled in all possible dishes, depending upon the different tastes of different emperors. Since the Mughals were Muslims and Hindus, a lot of the cuisine was also vegetarian-friendly and healthy. From delicious stews that were prepared by the ever-adapting cooks to even desserts that included cinnamon and saffron, every detail was immaculate.

As the years passed by, the recipes from the imperial kitchens trickled down to the general population all across the country. Now it wasn’t only the royal kitchens that were preparing these tempting dishes, but even the common people jumped onto the bandwagon by including these spices into their daily cuisines. From royal Mughal delicacies, these dishes found their way into bazaars and the street corners in several cities over time.

The Subcontinent’s love for spices and flavors is reminiscent of the culinary legacy that is so intricately interwoven in the regular diet of Indians and Pakistanis; be it a steaming plate of aromatic Hyderabadi Biryani, a gratifying plate of Daleem – with tender beef shreds or succulent, or even chargrilled Kebabs; each dish started off as a bespoke item before it became a regularity in our households. Many of the common desi dishes today can be traced back to the time of the Mughal Empire, like Kheer (Rice Pudding) and Haleem, which is obviously a labor of love. Each ingredient is selected to better the dish in one way or another – meat, barley, wheat, spices, and ghee. This concoction is cooked for hours, being stirred constantly under the watchful eyes of its cooks and then garnished with fried cashews and occasionally, a lime slice.
The term ‘Haleem’ itself literally means ‘Patient’, which proves that all good things come to those who wait – in our case, however, you would not have to wait too long to devour the royal delicacy at Laree Adaa!

Some of the most exquisite Mughlai dishes include Murg Musallam — a popular Lahori dish hailing from Mughal days. The name consists of two Urdu words; murgh or murgha meaning chicken while musallam refers to whole. Thus, it is a recipe made with whole chicken and spices.

Another appetizing category of items from the Mughal menu is a variety of Indian kebabs, which were taken as starters or snacks – with Boti Kebab and Reshmi Kebab being the popular preferences. Each comes with its own unique cooking process where the meat is sprinkled with seasoning and herbs before it is grilled into melt-in-mouth indulgent bites, befit for daawats.

Now! If you cannot help fantasizing about these delectable dishes, you won’t have to wait or search far – Laree Adaa brings you a diverse range of freshly grilled items like Seekh Kebabs, Tikka Boti, and a promising platter of mixed grilled items that are bound to deliver exceptional taste and quality.

Any time you enjoy a number of vegan curries or a plate of piping hot Biryani; or even a refreshing glass of sherbet from Laree Adaa – Try to envision a moment from the past where the royal cooks birthed an entire legacy to bring forth such great food that is appreciated and loved to this day. After all, we might even compete with the food-loving Mughal Emperors for the insatiable appetites we have!