As Old As Time; A Dive Into The Subcontinent’s Traditional Cooking Methods 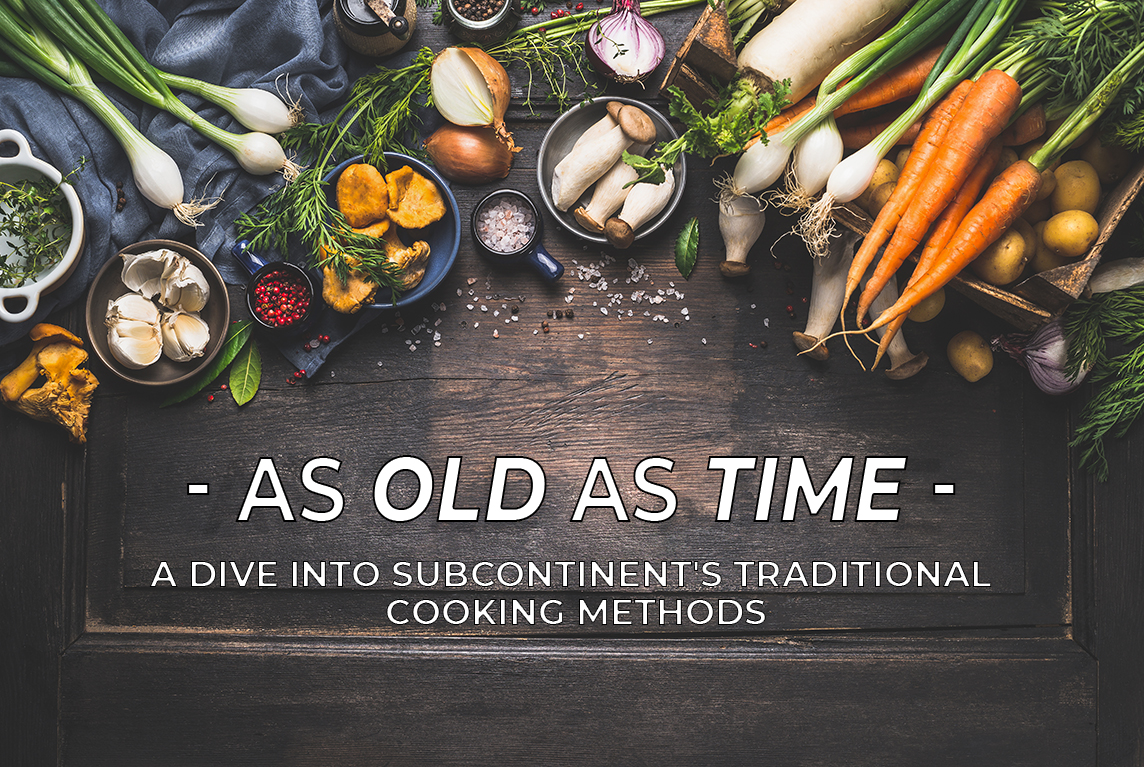 The echoing rhythm of a knife working against the cutting board, kitchen engulfed in a tantalizing aroma, loud sizzles of vegetables in the pan, and a mother working her generationally acquired magic into the food – Makes a deadly combination when bundled with the impatient urge to get our hands on the beautifully prepared meal.

Back in the old days, life centered around the idea that mealtimes brought families closer, and that contagious smile on your weary father’s face on taking the very first bite was enough for everyone to enter a joyous mood.

Mothers would traditionally pass on certain secret ingredients, quick hacks, and traditional cooking methods to their future generations — The best way to anyone’s heart was through their stomach after all. Old recipes were swapped and traditional techniques were passed on, with the idea to preserve and carry on this legacy.

Dipping a finger into a spoonful of steaming broth, as if immune to high temperature, and tasting it to contemplate the next ingredient before quickly blowing into the spoon and thrusting it in her daughter’s mouth for an ‘experts’ opinion on what’s missing — This is an accurate depiction of how mothers bonded best with their children, by involving them to be a part of the cooking process; while the importance given to their feedback, encouraged them to develop interest and learn from her.

The kitchen has always been their sacred space of experimentation, and a place to carry the weight of generational cooking traditions – Also, not only do these methods ensure maximum flavor, but they’ve also proven time and time again that they work most effectively and efficiently. This is the partial reason why they’ve become a tradition and have been endured throughout history.

The subcontinent has an extensively rich history of preserved cooking methods, starting with one of the most basic of all — Bhunao cooking; a technique that involves sautéing and stir-frying base ingredients such as chopped onions, tomatoes, ginger, and garlic in either fat or vegetable oils. However, this method is not to be confused with exact stir-frying as that uses a high temperature, and Bhunao requires comparatively lower temperatures, while also moderating to high ones from time to time. The reason for doing so is to ensure that the vegetables lose their moisture gradually, and it helps them to caramelize as time passes. Eventually, under watchful eyes, the oil separates from the mixture or masala, which happens to be a trademark sign of Bhunao!

Bhunao is still popularly used today, in order to perfect many types of Indian curries, and if you don’t think you would be able to pull it off at home, Laree Adda offers a solid range of meat as well as vegan curries that’ll compel you to come back for more of our authentic South Asian taste.

Another 4000-year-old cooking treasure is the process of salting food and curing it in brines to preserve it for longer journeys – This is where the famous Indian Pickles aka Achaar come from. What made this such a hallmark dish was the convenience of available pickles and the simplicity of the whole process.
Of course, we would be remiss if we did not mention the most beloved and popular pickled food in all of Subcontinent, Mango! And raw mango is actually preferred, thanks to the tartness they bring to the table – quite literally!

Also, if you think achaars are only used as a condiment (we’re thinking tarka daal with a side of fried chillies, kachumbar salad and – You guessed it right – Lots of aam ka achaar), you cannot be more mistaken because the achaari aloo vegan curry at Laree Adda is the ultimate evidence that this concoction makes for a finger-licking ingredient too!

While there are several ways of preserving pickles, like in vinegar, salt, and in oil; the oiling method is the most popular one in both India and Pakistan.

The bright colors of the pickles, combined with the divine smell of spices, is more than enough to make anyone desire to try it at least once. Almost all Indian households can reminisce about making Achaar and filling the pickles up in a ceramic jar, accompanied by their grandmothers or mothers during the holidays.

This other traditional cooking technique would probably have you watering by the mouth (you have been forewarned!). It’s the Tadka – A method that involves a range of spices, fried at high temperature, and later this spicy & fiery mixture is added on top of an ongoing dish, while some recipes are even cooked alongside it.

The sizzling spices in hot oil give any dish it’s included in that extra, deeper tone of flavoring, not to mention a spicy kick to your food. This method is most commonly used in Daals like Dal Makhani which originated in Punjab and grew in popularity during 1947 — The year of the partition of Pakistan from India.

One final technique that we’d love to mention in our brief list of traditional cooking methods, and that you must absolutely know about is Tandoori cooking. This methodology refers to cooking marinated food and meats inside a clay oven or over a charcoal fire. Historians mutually agree that all the credit for this type of method goes to the Persians, and it was specifically brought to India by Babur during the Mughal Empire.

Since tandoors are essentially kitchens that you can travel with, it was quite useful in feeding a massive group of army personnel that was on the march. The food such as boneless chicken, meat, or even vegetables are usually skewered and placed onto the tandoor to be cooked after they’ve been marinated in a masala mixture of some sort. The secret, of course, lies in the tandoor’s high heat which causes the marinated mixture to drip onto the hot charcoal, creating smoke, and hence roasting to add that smoky flavor to the meat. Once you bite into a fresh and juicy tandoori dish, you won’t ever be able to look back.
I’m sure the entire read has been quite appetizing – So if you’re interested in exploring the taste scale of all these cooking techniques, do not forget to make a pit stop at Laree Adda – A NJ-based desi food restaurant, which satisfies all the curious taste buds!