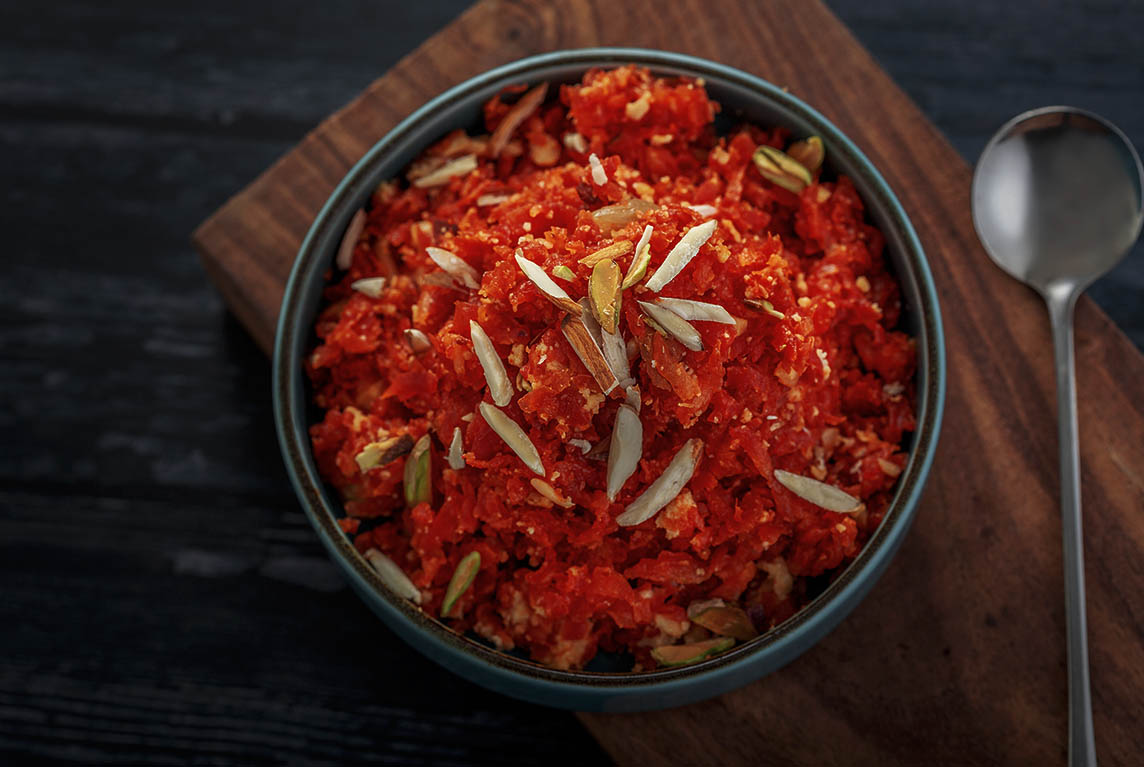 Doe-eyed Amavi stands on tiptoes in anticipation, trying to catch a glimpse of the bright reddish colour of the grated carrots in the pan. Her grandma’s expert hands fly at the ingredients around her — a dash of ghee, a bit of milk and a handful of sugar — as she recreates something that the entire family has adored for generations.

Dadi ma keeps a close eye on the child, telling her it’s almost done and smiles at the joy that appears on her pudgy face — amazing how a bowl of simple Gajar halwa is so effective in bringing the family together. The tantalizing aroma of the grated vegetable slow cooking in milk tickles her taste buds too – admittedly, she’s as excited for the halwa as the kid.
This family is in for a treat, she thinks to herself.

Sweet tooth or no sweet tooth, everyone appreciates a good dessert. And when it’s something as gratifying and comforting as the carrot-based sweetmeat, the indulgence is simply irresistible for both adults big on meetha and children who naturally only seem to have an appetite for confectionery snacks.

With its sugary aroma wafting through the entire kitchen and the carrots sizzling in the pan, the methodical halwa-making is a familiar experience for most Indians and Pakistanis, who grew up in a closely-knit family and recall their mothers or grandmothers preparing this dish as a part of celebratory meals or just because they were craving a dessert.

It’s a healthy dish (well, relatively!), and quite a simple one to rustle up, so it’s safe to conclude that most of both countries are bewitched by the carroty goodness. From a luxurious indulgence fit for a king, to a poor man’s comfort food; the affection for gajar halwa runs deep here.

Today, it is almost impossible to find an individual who is not tempted by such a delectable treat. But the sub-continent didn’t always have this seasonal treat – so where did it come from?

The origins of the halwa are tied to the Arabs — the word itself coming from the Arabic term ‘hulw’ meaning ‘sweet’ — and they had their own spin on it and used various nuts with butter, sugar and milk to create a more hardened, nut-based treat. Historians speculate that this kind of halwa was then introduced in India through trade during the time of the expansion of the Mughal Empire. And it is around the same time that the orange carrots entered the Subcontinent through international trade; they were much sweeter than other carrots and were of a non-sticky variety which allowed for experimentation in recipes.

Punjab instantly adopted this vegetable in most recipes, sweet or otherwise; and the popular orange carrot peaked as a winter harvest so naturally, it found its ways into the kitchens of many.

The classic vibrant colour and the chewy texture of the halwa became a favourite of the people like a hot delicious dessert. It suited them well in winters with warm cups of chai or as a cosy after-meal on a chilly December night and was a known favourite even among emperors.

As time moved on, halwa continued to adapt and so was tried in many different variations, as cooks started to add their own unique twists. From rubbery date halwa to aloo ka halwa, India alone has more than 20 different types, spanning across the country.

In Pune, you can try the proudly proclaimed ‘hari mirch halwa‘ made with green chillies, milk powder and cream — don’t deny it, we know your curiosity is piqued and rightfully so! We would very much like to try that one too.

But the carrot halwa / gajar ka halwa is by far the most popular and favoured one. The fact that it also has health benefits makes this a common dish among diabetics because of its low sugar content and an excruciatingly simple recipe that gives you results within minutes and also, because it’s a rich source of vitamins and fibre.

How is the delicacy made?

For most Indian-Pakistani households, winter has been synonymous to gajar ka halwa, casting its rich, aromatic spell over all who devour it in its warm glory. Since carrots have been known to boost digestion, combined with the nutty, fatty flavour of ghee, it all helps to keep the water warm from within, making it an essential part of the winter diet.

No more tucking yourself in blankets all day!

Come the cold winds of the north and the women of the house busy themselves in grating mounds of bright orange gajar, their lips already smacking in anticipation of the delicious treat that awaits them in the near future.  The air is filled with excited chatter as the ladies giggle and soak in some winter sun, swapping stories of who made the best gajar halwa. (NJ based Indian-Pakistani eatery “Laree Adda” would be a very strong contender on this list!).

The shredded carrot is tossed in a heavy-bottomed pot with measured ghee and stirred on a high flame until par cooked. This is followed by milk which is brought to an exuberant boil and then stirred into the veggie until the two become one. This is the point where the anticipation soars and the mouth begins to drool rivers. It is advised to maintain a distance from the half-cooked halwa at this stage (much for its safety than yours!).

Next comes the sugar, or for a more authentic Mughlai taste, consider jiggery (gurr). Now add the khoya and a bit more ghee and stir until the sweet fragrance pulls every family member to the kitchen with their nose in the air and eyes searching for the dessert they had long been waiting for.

It’s said the taste of the halwa is directly proportional to the labour that goes in – the more laboriously you stir the mix, the more enjoyable the taste; just one bite is enough to brighten up a dreary winter night!

While this sweet dish did originally come from the Middle East, no other culture or country has embraced it quite as fondly as India & Pakistan have; with additions and alterations, they have truly made it into their own.
So great is the influence and the love associated with the halwa that it’s an indispensable part of weddings, special celebrations like Eid and Diwali – a festival of lights celebrated by Hindus, Sikhs and Jains.

Be it any occasion, a plate of halwa is usually the most overdressed in the room, decorated or sprinkled with almonds and kishmish on top, simultaneously adding to the dish’s taste scale and immune boosting factor.

How do I get it right now – that too outside India or Pakistan?

As magical as this dish is, we wouldn’t be surprised to find you, our dear reader, severely hungry and already craving it.

Whether it’s to revisit certain fond memories and get that incomparable taste of childhood or just to try it for the first time, Laree Adaa is ready to serve!

They specialise in a variety of South Asian cuisine with quality that is unparalleled in New Jersey, promising an authentic taste and experience.

If you’re looking for an easy, comforting way to fight the frost, make a pit stop at the desi food resto to enjoy a piping hot bowl of this true Indian delight and thank us later!

Order yourself a serving here.