Lamb Biryani & The Flavors of History By Laree Adda 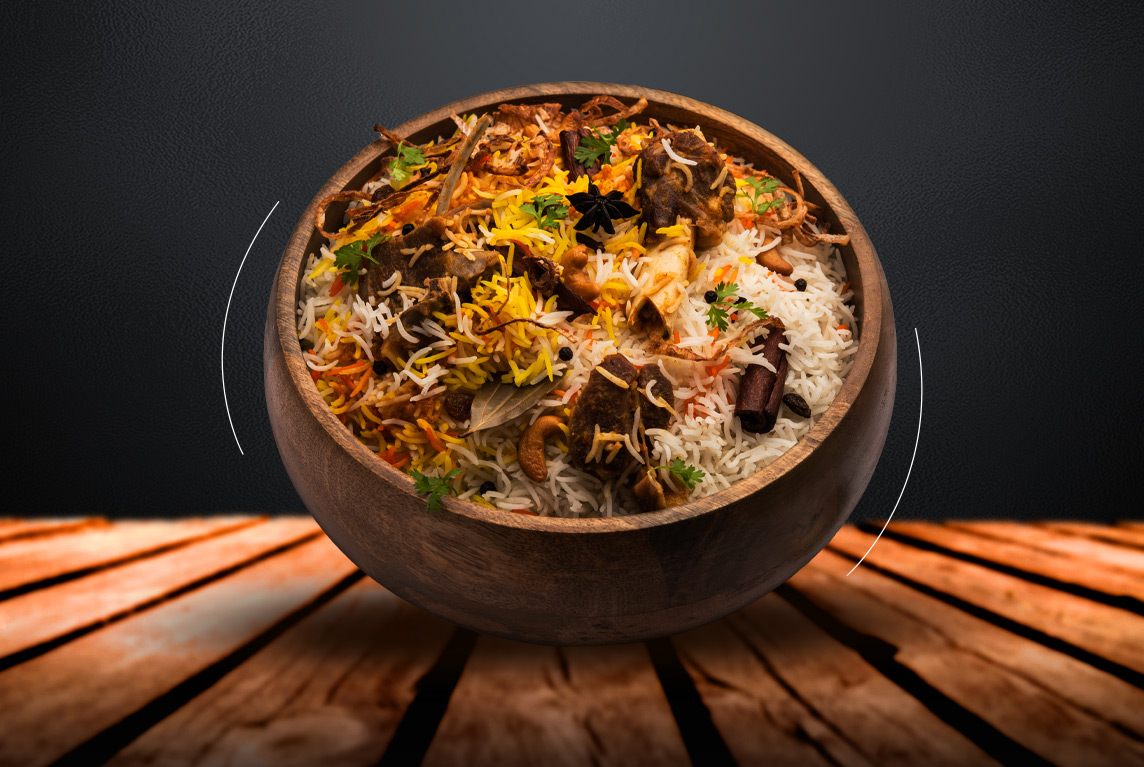 The crowned King in desi food,

The legend of the culinary culture,

And a love language of every food lover knows,

Biryani – An ancient food that has always been, and still remains the most loved dish of all time!

Flying from Persia, served to the Mughals, and coming all the way into the plates of your homes – Biryani, a legendary food loved by each person in the last 700 years and still counting.

India has a versatile history in food, culture, wars, and empires; but we, the food lovers, are always digging something related to food and its history.

Going back in time, it is said that this magnificent food was brought by the Persians now known as modern Iran, to the Indians Mughals and then introduced to the emperors of the times. Biryani came out to be the best dish of history because it was cooked by the hands of royal chefs of the Mughals and from there the word “Biryani” got its actual meaning. After making the Mughals happy, Biryani started its journey and took a lot of variants, getting different names and flavors according to the places where it traveled.

So what if Biryani’s origin was Persia but India was the one giving the true feels, scrumptious taste and richness, and aroma of the tasteful, flavorsome Biryani.

After the Mugahalai Biryani was invented, the journey began from the north and central India and the names of these mouth-watering flavors of each city starts with Lucknow biryani, Bombay biryani, Bengal Biryani as they innovated the idea of adding fish and prawns making it a seafood biryani, and it ends with to the most famous, the spiciest and a mixed taste of fat and meat with aromatic spices known as the Hyderabadi Lamb Biryani.

Lamb Vs Goat biryani was always a war of taste, and lamb biryani took over the taste of Mutton biryani which sounds so strange but yes, this is a fact and every fact has a reason and so the Lamb Biryani has. But before digging into the flavors of Lamb Biryani let us tell you some interesting biryani tales from the book titled “Biryani”.

From the Book “Biryani” by Pratibha Karan

Because biryani plays a significant role in the history of food, it has many interesting tales describing its creation and the person behind this tempting creation. So a famous Indian writer Pratibha Karan wrote a whole book naming it “Biryani” and added flavors and enjoyable stories to spice up the book.

Let’s start by going back to the history of biryani, as it starts with the Mughal emperor Shah Jahan’s wife Mumtaz, the inspiration for the Taj Mahal. It was said that one day she visited the army barracks before the war with her husband King Shah Jahan and she noticed that the soldiers were so weak and malnourished as she felt that the soldiers were not healthy enough to fight a war.

She headed toward the kitchen and ordered the royal chefs to prepare a meal with a balance of nourishment and taste then the chefs prepare big chunks of meat marinated in yogurt spices and saffron and the addition of basmati rice gave it the original taste and from that day, this biryani was known as the Mughalai Biryani, one of the royal types of biryani among all.

Another interesting tale is about the world-class Hyderabadi Lamb Biryani. This lamb chop biryani emerged in the 18th century in the times of a Mughal viceroy and the Nizam of Hyderabad Asif Jah. This biryani was a fusion of Mughal and Hyderabadi tastes. When Asif Jah visited the Mughal palace, he was served the Mughlai biryani which went straight to his taste buds and when he came back to his palace, he shared every ingredient with his chef and ordered him to make this biryani of Lamb meat instead of mutton. And that day, Hyderabad was blessed with the “Hyderabadi Lamb Biryani”.

There were several stories in the book “Biryani” by Pratibha Karan but these two were so relatable to the history of biryani.

When the word “Lamb Chop Biryani” comes, a picture appears in front of the eyes, a dish filled with colorful rice and meat, so greasy with the original fat of the lamb’s meat which is tastier and healthier at the same time.

What makes this Hyderabadi Lamb Biryani so colorful are the addition of different flavors, herbs, and spices.

As the Lamb’s meat requires time to be properly cooked, an expert chef will marinate the meat with yogurt and salt overnight to increase its tenderness so that it cooks fast.

And while cooking it is advised to add less oil because the lamb’s fat is enough to make the Lamb Biryani greasy which gives it a flavor that we used to have from our grandmother’s handmade biryani.

Biryani lamb must be tender enough so that it sauté well in the gravy made up of tomatoes, fragrant spices like Laal mirch powder, garam masala powder, coriander, and cumin powder, and other secret spices that make it look so scrumptious, so colorful as the Lamb biryani is coming right from the Shangri-La to your plates.

A secret key to making this lamb biryani rice tastier is to add raw garam masala while boiling the basmati rice. Before layering the biryani add fresh coriander and green chilies with some caramelized onions as it gives a flavourful garnishing to the biryani.

Are you thinking how this Hyderabadi Lamb Biryani recipe sounds too professional?

Let us make the big reveal!