The word on the street; a glimpse into South Asians’ love for visual poetry 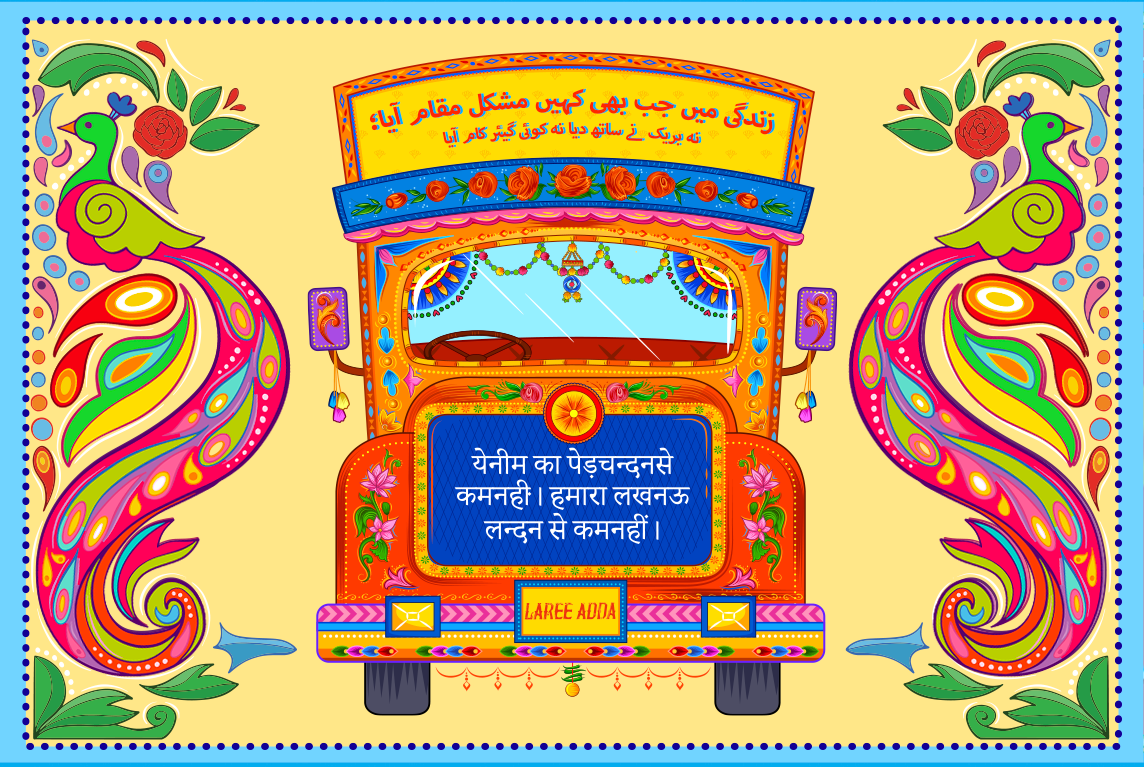 Picture this; you’re traveling on a bus in Karachi, Pakistan. Sitting on the special seat above the engine, you watch the dangling embellishments swish to and fro as the packed bus makes its way over the potholes in the city. An old Bollywood token song blares through the speakers, as more and more people make their way into the bus. The timeless music in the background depicts the worn-out bus that has withstood the test of time.

All around, you see vibrant colors vying for your attention, unabashed in their shiny splendor. The rexine seats that are just as bright as they are torn and in a dire state, receive a sigh of relief from a weary traveler when they catch an empty spot. Finally, your eyes rest on a cheeky couplet doodled on the bus door and your lips break into a grin. The verse reads:

Drinking alcohol is prohibited in my religion, so I’m drinking lassi in your memory.

We feel the poet; because the popular Mango and the classic Sweet lassi at Laree Adda in NJ, are just as addicting, especially on hot days when it seems to do just the trick.

You can also opt for the Salty lassi, as a healthier alternative or after a hearty meal at Laree Adda.

Talking about South Asia and visual poetry, one can NOT mention India! Sharing the same roots as Pakistan, India, the largest country of the SubContinent is no novice when it comes to the arts. Be it decorating the trucks as an Indian bride or painting their love for the region in brush strokes.

Art has been around for more than thousands of years.

Ever since the beginning of civilization,  humans have left unique imprints on their surroundings as a way to tell their stories.

From caveman paintings to sculptures to inscriptions on artifacts; Mortals have left an immortal mark, as an everlasting expression of themselves. Art is a form of self-expression, a human desire to connect with the world present, past, and future, and poetry is one of the most popular ways to do so.

The Poetic Soul of the Subcontinent:

The Subcontinent is strewn with glimpses of people’s thoughts and narratives. From confessions of love lost to the declaration of rebellion — a reflection of the times on the roadside walls and even vehicles. These include complex and layered interpretations of human nature. Allowing you to peek into others’ souls, if you were to pay attention.

With expansive histories and cultural backgrounds, South Asia is one of the earliest civilizations in the world. Old scriptures portray this region as a gold mine of education and knowledge, but because most countries here were impacted by colonial ruling parties, the education development was all uprooted in order to instill a more foreign viewpoint in education and culture. This affected most areas such as Pakistan, India, and Bangladesh.

This sense of frustration is present in graffiti, in slogans on walls and the backs of rickshaws and trucks, but therein also lies a sense of patriotism, a free will to decorate a country and to brand it with their own form of art.  This includes poetry in various languages and bold statements, often controversial, about political parties or anything in general.

It is perhaps, away, to literally leave a mark in history, a way to let people know and to reassure yourself that we, in fact, do exist, or that we are important and our ideas are valid.

It’s unlikely to find life-changing philosophy on the back of a public vehicle anywhere else in the world, but you can in Pakistan and India!

From romantic couplets to solid life advice, the vehicle behinds have seen it all.

Phrases like Dekh magar pyaar se, (You can look but with love) and hit Salman Khan movie dialogues like Mere baray mein itna mat sochna, dil mein ata hun samajh mein nahi, (Don’t think so much about me; I win hearts but am beyond comprehension)  is an everyday sight for passersby.

Such fun and quirky one-liners are not only reflective of the driver’s amusing personality but also serve as comic relief for passersby’s dull and drab lives.

While some are more playful and meant to evoke humor, others can be more insightful and forlorn, speaking out against a cruel and cold lover or a love lost because of circumstances:

As this truck driver gives us a valuable lesson, material obsessions are not always helpful when it comes to life.

Whenever there was a difficult situation in life; no brakes accompanied, no gear came in handy

Someone should hire this guy for philosophy lectures!

As long as you squander gold, the world is under your control; Just pull your hand a little and see, How selfish the world is..

And the ever classic “pick up truck” line, makes it inevitable for anyone to smile.

Heart for sale; price = only one smile

Nope, you can’t get away with your Buri Nazar here, trust us.

A rickshaw driver by the name of Abdul Manan, from Pakistan, says that it’s a great conversation starter on the streets, whenever traffic is heavy or even when it’s stopping temporarily at a red signal

He also shared that he’s had short interactions with some bikers that pass by, who’ve complimented him on his phrases and say that sometimes, that’s all you need to make someone smile after a long, tiring day at work.

An expression that has undeniably succeeded in gaining laughs or even a chuckle is, Has mat pagli, pyaar ho jaaega, (Don’t laugh, fool. You will fall in love).

I will become a Corolla when I grow up.

Where most trucks bring color and shayari to the landscape of roads, some prefer contributing to the society, with more meaningful things like portraits of missing children, hoping to bring them home, or public service messages.

No truck art is complete without a meaningful message.

Truck art has become a worldwide phenomenon of regional decoration in South Asia.  It is famous for its elaborate patterns, vibrant pigments, and intricate calligraphy.

Drivers take great pride in customizing their vehicles, whether it be mighty trucks or fast rickshaw. Dishing out a hefty amount just to have it decorated according to their tastes is no big deal for them, claiming that their vehicles are like a second home to them. After all, that is where they spend most of their time.

If you’re interested in learning more about the history of truck art, we have a whole article detailing its origins and significance here.

Branding your land – one phrase at a time

Whether it’s paintings of lovers from tragic folklore, majestic beasts, local and international household names, or even protest slogans, raging against the system — it’s a source of pride for each individual and nation and also a way for artists to let their imagination and creativity run wild.

The Subcontinent hosts a great number of brave people, who’ve found an outlet for all the histories of pain and frustration and transformed such emotions into something more beautiful and vocal.

While poetry and truck art are indeed pure art forms, passion resides everywhere, where there is creativity, such as food. Where every other art brings joy to your eyes, the art of food plays its magic from the inside.

If you’re a true aesthete by nature, you should make a stop at New Jersey based, authentic desi food resto, Laree Adda, where we are as passionate about our food as a truck driver is about their trucks,  Laree Adda is the intersection of inspiration and indulgence, which celebrates the art of traditional cooking and preparing flavourful cuisine to give you a taste of home.
Book yourself a table here.