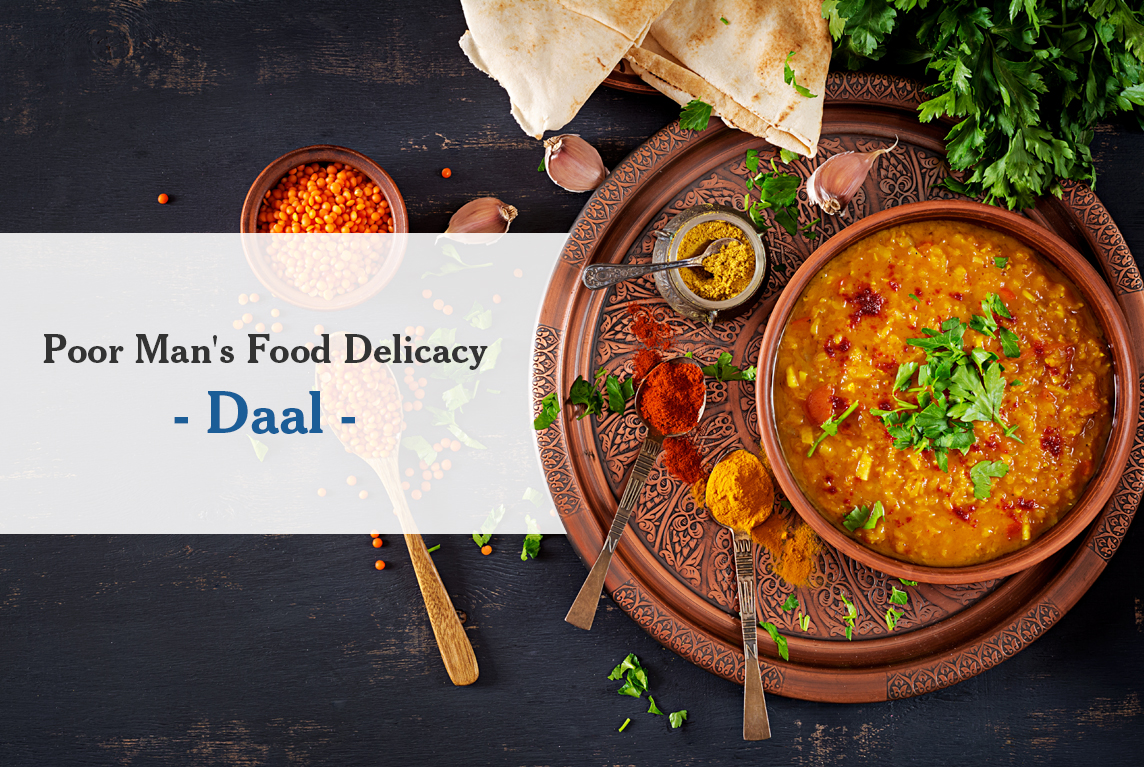 To say that my mother is a super cook is not at all an over-stretch – She can chop veggies at a lightning speed, needs a single bite from any meal to tell exactly what it’s lagging, and includes, and has countless recipes at her fingertips. However, if there’s one dish that beats my mother, it’s her signature Tarka Dal.

Being one of the staple dishes of the subcontinent – Dal, a beautiful yellow lentil soup cooked in spices, needs no introduction. An indispensable part of a desi’s diet, it’s made in all different kinds of ways, but I’m slightly biased towards the recipe with minimal spices and a whole lot of Tarka, with a side of achaar, and vegetable salad.

Amusingly dubbed as Dal Bara Maal, the dish is cherished and held dear by rich and poor alike. Each state in India and Pakistan has its very own favorite selection of Dals; some of the most common ones being Masoor, Moong, and Chana Dal are pretty much cooked and consumed everywhere – but what’s interesting is that all these Dals have their own distinct ways to be prepared across different regions.

Some of The Popular “Dal” Recipes

All types of Dal typically have an earthy creaminess in common, but it’s the fragrant tempering of delicate spices that gives them their distinct and unique flavors.

For instance, Dal Tarka or Dal Fry, which is quite a popular north Indian dish that’s made with split chickpeas and mixed with a blend of savoury spices. Whole spices are infused in oil – that is where the word “Tarka” comes from – and then this tarka is drizzled all over the Dal.

If you think we’re cruel for tempting you when you’re not in the country, fret not, as you can enjoy some of the best and regionally accurate “Dal Tarka” at your very own Laree Adaa – A New Jersey based, Eastern food resto serving home-like food when you’re far away from home!

You also should also not miss on trying Laree Adda’s “Lahori Cholay”, which are spiced chickpeas served in a thick curry, topped with black pepper onions – offering an amazing and nostalgic experience for your taste buds.

Quick Dive Into The Dal Lore

While every version of this dish is loved by most of the Subcontinent for its simple yet deeply comforting vibe, the fascinating stories behind its origin are more or less unknown. If you are a connoisseur of the humble Indian Dal, buckle up as we tickle your taste buds with some interesting tales about this delicious dish!

Lentil dishes are not a unique concept to Indians who have been known to prepare them very early on. Archaeological evidence indicates that the Indian Dal made its first appearance in the Indus Valley Civilization, where lentils – of all kinds – were a predominant food.

Starch granules of lentils such as peas, chickpeas, and black gram have been discovered in the interior surface of storage jars from the Harappan site of Farmana, which is located in the Ghaggar Valley of Haryana.

In fact, ancient Indian texts even contain recipes of Dals that were served to the guests during celebratory meals. Historians actually believe that in 303 BC, the special Dal served at Chandragupta Maurya’s wedding – who was the founder of the Maurya Empire, which was one of the largest empires of the Indian subcontinent – was the precursor of ghugni that is lentil preparation, and is still pretty popular in east India and can be often found being sold on food streets. Most people even consume Ghugni as a light breakfast, which is basically a spicy curry made with dried white peas, veggies, and spices like garam and chaat masala. It is also beneficial as it is packed with healthy proteins, while being oil-free.

In medieval India, it was the revival of the dumpukht technique, which is slow cooking in steam, that raised the stature of Dal, especially “Chana Dal”, and was included in the royal kitchens – So much so that in the years to follow, serving any other Dal except Chana Dal, to the Emperor was considered a suicidal move by the royal cooks.

The Mughals’ Seal of Approval

A simple, nutritious yet subtly flavoured mix of 5 lentils – Moong Dal, Chana Dal, Toor Dal, Masoor Dal, and Urad Dal is what collectively created the “Panchmel Dal”, which was one of Jodha Bai’s favorite dishes. She was the favorite Queen Consort of Akbar, and was the longest-serving Hindu Empress of the Mughal Empire.

When she married Akbar, she introduced it into the predominantly non-vegetarian Mughal kitchen, along with a handful of other vegetarian dishes.

Panchmel Dal was such a big hit with Mughal royalties that by the time Shah Jahan took over the great Mughal throne, the court had developed its own official Shahi Panchmel Dal recipe – It was a source of pride for Aurangzeb who, being a strict vegetarian, fancied the dish even more than the served roast meat dishes.

Food historians also believe that the Panchmel Dal may have been born out of the necessity to create a different tasting Dal for the royal meal every day – changing the combinations of Dal and the tempering ensured that it tasted unique every time!

So there you have it – The history of every popular & loved “Dal”. Whilst the ingredients differ across the Subcontinent, one thing is for sure – This is a classic and timeless dish. So come down to Laree Adda and enjoy a meal that is fit for kings and vagabonds, alike!