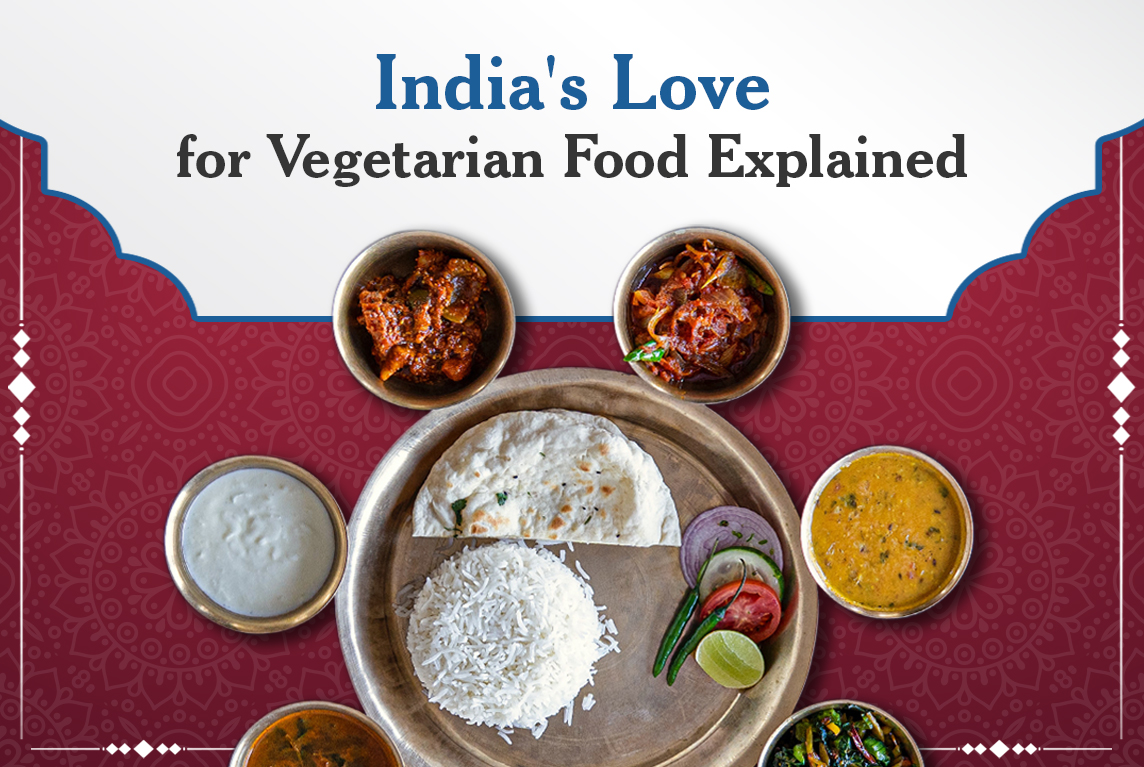 Not many things can be compared to the joy of creating a curry from scratch. Nothing too complicated; just spices, herbs, vegetables (and/or meat) simmering and bubbling in a stockpot with inciteful aroma – And you know you want to dig in because it smells so good!

And with the onset of Coronavirus around the world, the consciousness of what goes into our meals has increased all the more. Perhaps the most readily ingredients during the pandemic were vegetables that are believed to offer an immunity boost when cooked with effective spices like haldi. This, paired with the obsession desiis already have with greens, has catapulted vegetarianism to a new high, one that has readily been embraced in the Subcontinent, especially in India.

How Long Has The Obsession Existed In The Region?

No cuisine is possibly more closely associated with vegetarianism or veganism as Indian food, and there are myriads of reasons for that. Mainly, it has to do with its geographical location; given it’s a crowded country so every bit of land and resources are used to grow crops and various vegetables, grains, and even beans. These have been growing in abundance in India since 1000 BC – more than perhaps anywhere else in the world, historians confirm.

Hinduism, being the largest religion practiced in all of India, promotes and advocates the concept of ‘ahimsa’ or non-violence. With India accommodating almost 94% of the global Hindu population, it comes as no surprise that the practice of eating vegetarian food is widely accepted since consuming meat would involve killing animals which would be a direct contradiction to their beliefs.

Cows, in particular, are revered by Hindus because they efficiently turn fodder into milk, their dung is used as fuel, and they also pull carts. This is also why many omnivore Indians have traditionally shunned beef.

Throughout all of history, even the most highly respected figures ranging from Emperor Ashoka all the way to Gandhi, actively promoted a meat-free diet as it seems to be the most peaceful way of consuming food.

Vegetarian food is often dubbed as bland and flavorless “ghaas phoos”, since it’s a well-known stereotype that healthy food cannot be fun. However, India has proven time and again that’s not the case and NY-based resto Laree Adda’s vegan curries menu is enough evidence.

Since vegetarianism has existed in India for a long time, the food has had thousands and thousands of years to develop and for people to figure out the perfect combinations of spices. That gives Indian cuisine a unique edge when it comes to incomparably great veggie-friendly food, and everyone knows that Indian food is anything but boring or flavorless – In fact, it is quite popular for its diversity and variety.

It’s also an added bonus that most traditional Indian dishes help to support immunity, reduce inflammation, boost brain functions, and several other purposes in the human body. Since our bodies need a number of foods and nutrients to support the cells to help them function efficiently, Indian cuisine provides just that with its variety of spices, and each has its separate health benefits.

A traditional Indian curry, if cooked with the right ingredients like curry leaves, tomatoes, Tumeric, black pepper, oils, and spices, is great for boosting the immune system and can also help in reducing inflammation – which is the root evil for most diseases like diabetes, high blood pressure, and heart diseases.

Do you also wake up craving achari aloo with puffy, fried puris or is it just us?

Simple, unpretentious, and meat-free, vegan food contains little to no-frills but packs a punch in the flavor department.

The most common vegetables used in most Indian dishes are probably onions and tomatoes — with these two acting as the base for most gravy dishes. ‘Veg dishes’, as they are popularly called in the country, are also likely to include dairy products such as ghee – which is butter, yogurt, and paneer (cheese).

If you’re big on cheese, you might want to head to Laree Adaa – It serves an exceptionally tasteful Palak Paneer curry that is essentially cottage cheese squares mixed in smooth spinach gravy.

And if the aforementioned “Achari Aloo” is still on your mind, order yourself a serving from Laree Adda – Basically an aromatic curry potato wedges, stir-fried with spices for a delicious Indian kick and tangy taste, we bet you’d keep wanting more.

Psst!! Don’t forget to pair it with some paratha, raita, and salt lassi for a wholesome, home-like meal at Laree Adda, when away from home.

Speaking of home, if there’s one vegetable unanimously enjoyed by all desi kids, it’s Bhindi. And no one does a bhindi ki bhujia like a desi mom.

If you cannot make a trip to the subcontinent just yet though, the bhindi masala at Laree Adda is as close as it can be. Sticky and crispy, we bet you’d want to save some to take to work the next day – or maybe to come back the day after with all your non-desi work friends.

There is no denying that vegetarianism is one of the most prominent diet trends at the moment that has taken the world by storm.

And for good reason too!

One of the healthiest diets that is beneficial, especially in the long run, is one that promotes awareness about where your food comes from and how it’s produced — not to mention the easy digestion of greens or the various properties of vegetables and fruit such as antioxidants or vitamins.

With an audience that grows more conscious about their eating habits and how it affects the environment around them, vegetarianism is here to stay.

And such a diet has already been an integral part of Indian culture for a very long time; from amazing tropical vegetables and comforting dahls to tangy street food, the choices are truly a thrill for the taste buds!

If you are based in New Jersey and are now drooling rivers thinking about all the flavors of home – You should drop by Laree Adaa for a nostalgic dining experience.

– Laree Adda –
Serving The Best of Everything