– ZEERA –
The Unsung Hero of The Culinary World 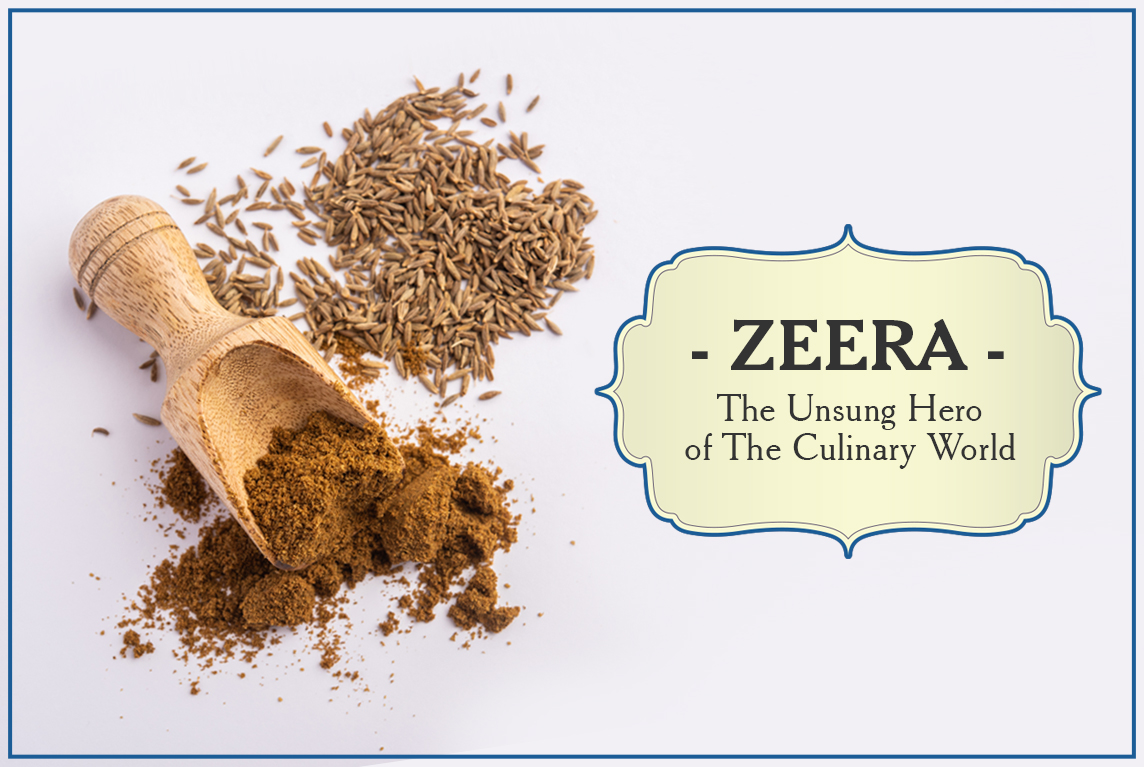 Consider this a love letter to the vastly underrated, often neglected, “ Cumin” – The nutty & oddly-refreshing spice that commonly adorns the kitchen shelves of most South Asians is an indispensable part of cooking, but never bags the praise it truly deserves.

We know desi cooking is no child’s play, it’s a delicate art form that combines different flavors to amp up a dish, each ingredient and its quantity is meticulously calculated so as to avoid overpowering other ingredients. One ingredient that stands out in curry cooking is Zeera or Jeera (cumin) which gives off a delicious, earthy flavor and aroma.

Zeera is basically a dried seed of a herb called the ‘Cuminum Cyminum’ that can either be used as a whole or ground up into a fine powder. Almost brown-yellow in color, it brings out a natural sweetness when used in dishes and provides the perfect nutty texture, if used as a whole.

Where Did Cumin Originate?

This spice can be traced back to almost 5000 years ago, and it deserves a separate highlight of its own — hence this blog! Fair warning, you probably won’t be able to look at cumin the same way again because of its interesting origin story.

If we were to pin down exactly when Zeera was used in recipes, not just to add an extra layer of flavoring but also for its medicinal properties, we would have to say that it would be around the 1st century BC in the Eastern Mediterranean region, to be specific, where they used it for baking fish. And wait, this spice gets spicier. Egyptians actually used Zeera during processes of mummification as a preservative!

That isn’t, fortunately, the only interesting fact about the pantry essential — It is easily one of the most globetrotting spices on Earth; from Chipotle tacos to tadka daal (a wicked version of which can be easily found at Laree Adda, the delightful hub of ethnic cuisine in New Jersey), cumin has spiced up the world! Cumin is not just an Indian food darling but cooks everywhere from Cuba, where it’s rampantly used in mojo, a popular garlicky sauce, to the Middle East, to China, where it lends flavour the grilled meats of the country’s Muslim minority, hold it in great reverence.

Back in the day, the Greeks believed it to be a symbol of desire, while the Romans extensively used it in their kitchens over time, this spice made its way to India through traders where it found a way to stay indefinitely.

What’s So Magical About The Spice?

And since then, cumin has become almost inseparable when it comes to some dishes with specific ingredients, like the classic Indian tadka or adding it in piping hot ghee. Because of its healing properties and doses of antioxidants and vitamins naturally present within the spice, specifically Vitamin A & Vitamin C, it’s used as a natural digestive. The word Zeera or Jeera translates to ‘one which helps with digestion’ in Sanskrit, so the health benefits definitely do check out! Recently people have started adding this more frequently in their dishes to promote overall health and also, to help manage weight loss.

“It has become one of the most commonly used spices in the world,” observed Gary Nabhan, author of ‘Cumin, Camels and Caravans: A Spice Odyssey’ which discusses in detail the relationship between the spice trade and culinary imperialism.

With 300,000 tons of cumin produced on an average yearly basis worldwide, India alone makes up for 70% of the supply and no surprise there, considering how often it is used in many things. From rice to desserts to making chutneys with cumin, not to mention the very easy to fix and equally tasteful to eat, zeera biscuits the subcontinent is obsessed with, it’s a flexible spice that the South Asians adore using in their kitchens and experimenting with.

Some Fabulous Zeera Dishes To Get You Drooling:

2 of the most popular recipes prepared with zeera, in India, are Zeera rice and Zeera potatoes/aloo (which is a dish consisting of potatoes sautéed with cumin seasoning and is usually a side dish in a meal).

Because of its versatility, the ingredient is also used in drinks like zeera pani, a refreshingly tangy quencher made with tamarind and cumin, so unique in taste you’d want to come back for seconds. Most overseas desiis try not recreating this combo, much out of fear of ruining it, but don’t worry; they get their fix every once in a while from Laree Adda.

So, it is recommended that every food or cooking enthusiast have this in their pantry for various purposes. Curries, classic Mexican dishes like fajitas, hummus, seasoning on all sorts of meats or even just vegetables. The list is basically endless when it comes to using cumin in various ways — Some even claim that it can help cure insomnia, thanks to its calming properties; just adding boiled cumin seeds to a glass of water and drinking it helps calm nerves and makes one drowsy enough to sleep.

We know what you’re thinking, because we’re thinking it too — It seems like Zeera was secretly a power spice all along! And we wouldn’t be wrong since it’s not only loaded with medicinal benefits but also, once you develop a taste of it, you’ll crave it even more. That’s why we’re inviting you down to Laree Adaa for a bite to eat and get a sense of that South Asian cuisine that’s obsessed with Zeera.